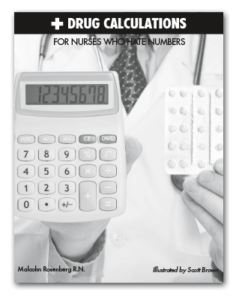 If you have trouble with drug calculations, these caricatures will be your friends.
by Malcolm Rosenberg, RN

During my long stay in nursing school, I have seen many students struggle with the mathematics of drug calculations. As someone who had previously struggled with the numbers I have been quite successful in explaining this material to students who hate numbers.
As I drew pictures, did examples, made analogies and anything else to explain the material, this book wrote itself. I believe that the same pictures, examples and analogies that worked for my fellow students will work for you.

Throughout the book, I use cartoons to show the medicine as visible objects not just numbers. While teaching other nurses, I have found that the cartoons make the quantities and/or motion very easy to grasp. Here are a couple of examples from the book…

The last pill that we’ll talk about is scored so you can break it into thirds.
The anti-depressant, Desyrel 150mg, is scored so it can be broken
into thirds of 50mg each.

If the prescribed dose should be 100mg,
you would break off one part and give the other two.

Or more clearly stated, one microgram per minute
for each kilogram of body weight.

Each kilogram of body weight should have one microgram
of medication flowing through it each minute.

Let’s look at a real-life situation. A very typical order before surgery might read:

Ancef (cefazolin) is a broad spectrum antibiotic. Agood lesson that you’ll need to remember as long as you’re a nurse is Never Mix an antibiotic with any other medication. So you would not mix anything with the Ancef. Ancef comes as a powder in a vial. The directions say add 2.5ml of sterile water. Sterile water is just what it claims to be sterile water. It is used for reconstituting powders. 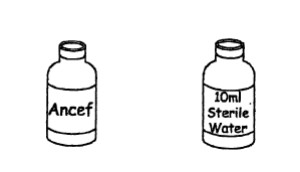 Then inject the water into the vial and make sure the liquid is clear. Withdraw the reconstituted Ancef in the same syringe and label it with tape “Ancef 1 gram.”

Before you start to draw up the other medications write the label for the next syringe. It will read:

That’s a lot to write on one tape. But it will avoid a mistake. I would write it on a piece of 3″ tape. The next step is to get the morphine sulfate (M.S.) and versed. They are narcotics and would certainly be locked and require a count and signature to remove. The Scopolamine and Region would probably be in the patient’s medication drawer or the general stock in the medication room.

What we are going to do is draw up the correct amount from each vial and squirt them into one syringe (one injection with four medications).

Let’s look at the size of the syringe we’ll need. We have 3cc, 5cc, and l0cc syringes. Whichever one we use, we’ll squirt the medications into it and put a needle on.

Let’s estimate the volume we need. 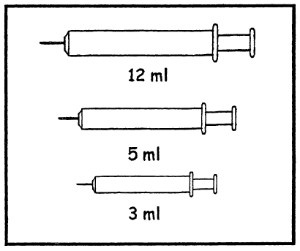 The whole morphine vial is lml. We need less than the whole vial or less than one ml.

From the bottle of Scopolamine .4mg is lml. Once again we need less than the whole vial or less than one ml.

l0mg of Reglan is lml. We need the whole vial or one ml.

By quickly estimating the volume we need about 5ml. So it wouldn’t hurt to use a larger l0cc syringe.

Let’s start with the Versed. The vial reads 5mg for 5ml. How many ml would we need to draw? Well draw 3cc and squirt them into the l0cc syringe.

Next is Scopolamine which comes in a lml vial containing 0.4mg. The vial says 0.4mg per ml and we need 0.3mg. For less than lcc I would use a lcc tuberculin syringe. Then as before squirt it into the l0cc syringe. Now the l0cc syringe we’ve been filling contains ____ cc?

Moving right along. The Reglan vial says l0mg per ml and we need lomg. So we need lml or the whole contents of the vial.

Morphine comes in a prefilled syringe with l0mg in lml.

The order calls for 6mg. The syringe will always be clearly marked in 1/10 increments.

Each whole ml has l0mg. Each tenth ml has 1mg.

Since the l0mg of Morphine is completely dissolved in the milliliter of solution, we know that each tenth of the total volume contains lmg of the Morphine. So to get 6mg we would squirt 6/10ml into our syringe.

How much have we squirted In so far?

You should verify a volume of 5.35ml in our l0cc syringe. Generally, you would limit an injection to 3ml. So you would divide this into 3ml and 2.35ml.